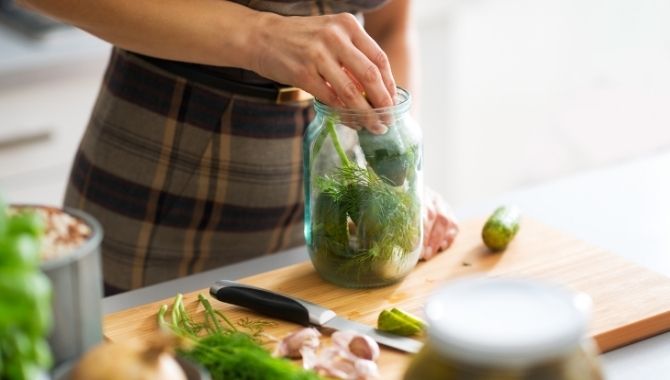 Pickling can be done in two ways: either fermenting the vegetables in a brine solution or immersing them in vinegar. The process is done to food to preserve its shelf life, alter the food’s taste, and even improve its nutritional value. People can make pickles from almost any food but the term is generally synonymous with pickled cucumbers.

Pickled cucumbers offer more nutritional value than raw cucumbers but also contain a lot of sodium and sugar that might negatively impact one’s health. Cucumbers are a staple in the average diet and in this text we are going to see whether or not it can be included in a vegan diet as well.

Are pickles vegan? Yes, the basic ingredients used in making pickles are cucumbers, brine or vinegar, and a few flavouring and preservative agents. Based on the basic description of a vegan lifestyle, none of these ingredients is sourced from animals, making pickles 100% vegan-friendly. However, if you encounter the cheese-stuffed fried pickles, those are not vegan.

From dill to bread and butter, sweet, spicy, and sour, there are several different types of pickles. The process can result in quick pickles, which are cucumbers immersed in acidic acid, or fermented pickles, which are sourced by Lacto-fermentation.

Regardless of what variety you prefer, pickles are generally full of flavour, crispy, and delicious. You can enjoy pickles on sandwiches, and the fact that they contain about 7-20 calories makes them the perfect healthy snack. Without much delay, let’s get right into why pickles are considered vegan.

The Vegan Status of Pickles

In this part of the text, I’m going to cover all the ingredients found in pickles and their vegan status so you can see why it’s okay to add pickles in your vegan diet. The basic ingredients include:

This one is obviously vegan-friendly as it is plant food, especially if you get them from the farm market. Supermarket cucumbers, on the other hand, tend to be heavily waxed to prevent moisture loss and also give the cucumber a glossy green sheen to make it attractive.

Some use food-grade paraffin wax, which is synthetic and vegan, while others use confectioner’s glaze, which is derived from animals. Most vegans won’t scrutinise such products too heavily but if this doesn’t sit well with you, consider getting fresh cucumbers.

This is a high-concentration solution of salt in water. Salt is used to draw out the liquid from cucumbers, thus extending their shelf life. It also controls the growth of bacteria and yeast during the fermentation process. Salt is a mineral that consists of mostly sodium chloride. And, minerals are mined from the earth and not derived from animal sources. Plus, unlike sugar that achieves its white colour with bone char, salt crystals are naturally translucent.

Vinegar has different variations as it can be made from different plants, including grapes, barley, and apples. But ultimately, it’s a result of fermenting ethanol into acetic acid. Since vinegar is a derivative of wine, its status will depend on whether or not the wine used was vegan. In the case of pickles, the vinegar used is usually vegan-friendly.

The lactic acid in fermented pickles

When cucumbers are pickled via fermentation, the microbes feed on starches and sugars to naturally produce lactic acid. And naturally occurring lactic acid is vegan.

Other Ingredients Common in Pickles

Cucumbers tend to lose their firmness throughout the pickling process and calcium salts are often added to firm the texture of the food. The calcium salts used to add firmness in pickles is usually calcium chloride, which is vegan-friendly.

Calcium disodium EDTA is another calcium salt added to pickles. It’s a synthetic preservative that is used to prevent crystal formations and slow colour loss. It is formed via chemical synthesis without the use of any animal product or by-product.

This can be used in pickles as a leavening agent, as well as for pH control. It is made from sodium carbonate, which is mined and therefore 100% vegan.

Although pickles are mostly flavoured with salt, some kinds are given a touch of sweetness by adding high fructose corn syrup. This ingredient is also vegan-friendly.

A variety of flavours are used in pickles to suit different tastes. They include mustard, turmeric, cumin, coriander, dill, anise, tarragon, and fennel, and are all vegan-friendly.

This is the only ingredient in pickles that is potentially non-vegan as it is derived from fatty acids that are present in animals. They serve as emulsifiers and surfactants in pickles and a number of food products. Not all vegans will dismiss this ingredient but if you are a strict one, you may what to look out for it when buying your pickles.

What Pickles Can Do for Your Health

The main benefit of pickles, particularly the fermented ones, is that they contain beneficial bacteria. The sugars in the vegetable are broken down during the fermentation process and turned into lactic acid, which holds the probiotic benefits. Probiotics are live bacteria and yeasts that are crucial for gut health. This, in turn, helps to prevent yeast infections, diarrhoea, constipation, and even aid in the treatment of chronic stomach issues like Crohn’s disease.

Although pickles made in vinegar don’t contain probiotics, vinegar is said to improve the body’s response to insulin. This can help keep your blood sugar levels even and prevent sugar spikes, which is quite beneficial for people with diabetes.

Electrolytes are salts that the body needs for healthy functioning. When a person sweats a lot, vomits, has a fever, or are generally dehydrated, they may lose electrolytes. Pickles are high in sodium, which means they are also high in electrolytes.

Pickles contain the natural antioxidants found in fresh fruits and vegetables. While cooking can break down some of these nutrients, the pickling process preserves their antioxidant power and nutritional value. Antioxidants prevent free-radical damage and boost the immune system so your body can naturally fight diseases.

Store-bought pickles are usually heat-treated to make them shelf-stable. This process kills off the beneficial bacteria, which as we’ve seen are the biggest benefit for consuming pickles. They also often include preservatives and stabilizers so they last longer. The key is to buy the refrigerated kind as they have more health benefits.

But the biggest concern for consuming pickles is the fact that they are high in sodium. The recommended daily intake of sodium is 1500mg-2300mg. This sounds like a lot but, as it turns out, it is about 1 teaspoon of salt.

Salt makes up about 5% of pickling recipes with two small spears containing about 600 mg of sodium. This is already more than a quarter of the recommended daily limit. Add this to all the other foods you consume in a day and it’s easy to exceed your daily salt intake.

Too much sodium in your body can cause high blood pressure and increase your risk of having a stroke, heart attack, kidney stones, and osteoporosis. It also causes bloating, which is as uncomfortable as it is unattractive.

How to Buy Healthy Pickles

We’ve seen the pros and cons of consuming pickles. And, to get the most benefits, it’s important to know what is in your pickles. The first step is to check whether it’s fermented pickles because they are the only ones that offer probiotic benefits. The next, and most important, step to finding healthy pickles is checking the sodium content. Consider those with the lowest sodium count and be sure to pay attention to your sodium intake throughout the day to ensure you don’t exceed the recommended daily sodium intake.

With that being said, your best bet for healthy pickles is making them at home. All you need to do is add fresh cucumbers to a brine solution, then add a few herbs and spices for taste. Carefully follow boiling and canning instructions to prevent the growth of bad bacteria. Keep your pickles sealed for a couple of weeks and then eat them.

Other than cucumbers, people around the world pickle all kinds of vegetables, fruits, and even meats. Here are a few that you can try in your vegan pickle experimentation:

Are the other pickled veggies and fruits any different? Not quite, although the vitamin, mineral content, antioxidant, and taste might differ depending on what is being pickled.